The Kaladesh pre-release was this past weekend, and as usual I started with the midnight release. Here’s the pool I opened: 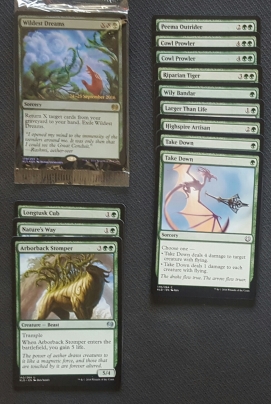 And here’s what I ended up running. I would really appreciate any comments and suggestions on my deck building. It seemed like the best deck to me… so please let me know if I missed anything:

My opponent was playing a lot of vehicles, including the Renegade Freighter, but I drew enough removal to keep them uncrewed. Embrall Bruiser felt very good with an aggressive draw.

I liked the way the vehicles played. They cause some interesting board positions and combat choices.

In the second round I played against a fairly inexperienced player. He was playing a lot of do-nothing enchantments and artifacts. He ended up with a board full of vehicles that he couldn’t crew and I curved out quickly.

I think it’s quite easy to put too few creatures in your deck in this format. Maybe that makes aggressive decks a little better?

In the final I was up against a veteran player who opened a Chandra and a Nissa in his pool. Thankfully my opponent flooded out and only saw one of his planeswalkers across the two games.

The Maulfist Doorbuster was quite impressive pushing through the last few points of damage, and the two Assembly Workers I was playing felt like massive value when I played one.